The purchase of three properties by President Trump’s son-in-law on the banks of a toxic Brooklyn canal triggered a series of unusual real estate deals and a windfall profit from transactions financed by a bank tied to the Trump family.

The property transactions totaling more than $150 million began in late 2014 and early 2015 and included sales prices well above the assessed value of the parcels, as well as high-risk loans that experts said raise red flags. At the center of each deal is either Jared Kushner or Michael Cohen, whose business dealings have attracted close scrutiny from prosecutors and regulators since Trump’s election.

The transactions were financed through Signature Bank, one of three banks whose ties to Kushner have been widely reported to be under review by New York banking regulators. The bank’s board members have included Ivanka Trump and former Republican U.S. senator Al D’Amato, a dealmaker and power broker in New York business and politics who has been a vocal supporter of President Trump.

It’s unclear whether these deals are part of the state’s review. But these previously unreported details shed new light on how Trump’s closest associates conducted business in the high-stakes New York City real estate market and how Cohen benefited personally from his relationship to Trump and his businesses.

USA TODAY asked six real estate, finance, and tax law experts to review aspects of the real estate deals and mortgages. Each cautioned that the deals could be perfectly legal, but they said the timing of the transactions and the fact that so many related parties were involved make them highly unusual and raise red flags about the rapid inflation of property values.

Michael Cohen did not respond to written questions, nor did Kushner Companies.

Signature Bank spokeswoman Susan Lewis said in response to questions about the bank’s relationship with Cohen that “the bank’s senior management did not have any knowledge of him or who he was until he started appearing in the newspapers in the last year.”

The series of deals involving Trump associates started in a contaminated parking lot on the banks of Brooklyn’s Gowanus Canal.

In October 2014, a joint venture led by Kushner Companies paid $72.5 million for three lots of land along the polluted waterway to a company owned by New York developer Herbert Chaves. Kushner’s company was a 5% shareholder in the venture, and commercial real estate company SL Green held the rest. Real estate and lobbying records indicate the Kushner firm was the operational leader of the venture.

Chaves' firms used the cash from Kushner to buy apartments from Trump attorney Michael Cohen. Chaves paid $32 million for four apartments that Cohen bought one to three years prior for $11.4 million.

The collective market value of the four properties at the time of the sale Dec. 10, 2014, was a total of $6.6 million, according to New York City property assessment records — roughly one-fifth of the purchase price.

Chaves did not take out any mortgages for his purchase of the four properties, which are on Manhattan’s Lower East Side and its Kip’s Bay area.

The deal was part of what is known as a “1031 exchange,” which refers to a section of the Internal Revenue Code that allows a seller to defer tax payments by rolling the proceeds from one real estate deal into another within 45 days.

Cohen, in turn, immediately reinvested his new $32 million in a 1031 exchange of his own — part of which involved Chaves.

Aspects of the swaps involving Cohen and Chaves have been reported by McClatchy.

The earlier deal, between Kushner and Chaves, has similarities to the Chaves and Cohen deal under scrutiny.

The purchase price in the Kushner deal far exceeded the assessed market value, which was $3 million at the time of the sale, according to city records. A newly opened Whole Foods in the area served as a sign of the transitional neighborhood’s promise, but the ideal location was on land spoiled from decades of industrial use.

The 3.2-acre canal-front property, used as a parking lot for utility service vehicles, features views of a waterway that on a recent day was strewn with debris, including a sideways shopping cart and overturned stroller. Former tenants — including a wagon painter, blacksmith, auto wrecking facility and gas station — left volatile organic compounds in the property’s soil and groundwater.

In addition, the property was not zoned for residential development, limiting what could be done with the land, absent an approved zoning change.

Experts who reviewed details of the transaction said they were struck by the high purchase price, given the level of contamination on the property.

David Zimmel, president of Zimmel Associates, a New Jersey commercial real estate company that does business in New York, said he was surprised the Kushner-led team would have paid that much for property without some guarantees that it would be able to recover its investment.

“It’s crazy money,” he said. “To pay that kind of money and not be sure, I’m surprised.”

The property’s environmental issues made it a risky proposition for any bank looking to back a development venture. If the site couldn’t be decontaminated, the property was never going to be much more than it was — an eyesore where Verizon parked vehicles.

The transaction in October 2014 was backed by a $40 million mortgage from Signature Bank. Ivanka Trump was a member of Signature Bank’s board of directors from 2011 to 2013, according to Securities and Exchange Commission filings. She served on its risk committee, which is responsible for reviewing high-value loans.

At the time of the deal, Signature Bank’s board included former senator D’Amato, who founded and is the managing director of the lobbying firm Park Strategies.

Catherine Ghiglieri, a former banking commissioner of Texas and co-author of two books on banking, said banks have policies and procedures that are used to make loans, and if there is toxic waste on a site with no cleanup underway, the “bank will not loan money unless there is some mitigating circumstances.”

“They are lending other people's money,” she said. “They are not venture capitalists. They assess risk based on the loans. I would not see that kind of loan being made by a bank.”

Yacov Levy, a venture capitalist based in Boston who was a director at Signature Bank at the time, said he was impressed by Ivanka Trump’s business acumen and noted she did not participate in discussions of the mortgage for the Brooklyn property.

“During our meetings, there was a portion to discuss any conflicts with any bank directors,” Levy said. “She left the room for any of those discussions (regarding Kushner loans).”

Lewis, the bank’s spokeswoman, said Signature Bank “is fully compliant” with Federal Reserve regulations, “meaning any member of the board of directors cannot have any involvement in the approval process for any loans to which he or she is related, including those of family members.”

During the 3½ years the property was owned by the Kushner joint-venture, efforts to develop the land hinged on clearing environmental and rezoning hurdles to unlock the value of the property.

Kushner’s company applied in 2015 to the New York State Department of Environmental Conservation’s Brownfield Cleanup Program for funding to remove contaminants from the land, and it was approved later that year. The state installed monitoring wells to investigate contamination on the site, and an investigation report is being finalized.

New York City lobbying records show the Kushner joint venture poured $180,000 in 2015 and 2016 into an effort to lobby city officials to rezone the land.

New York City Councilman Brad Lander, who was among the lobbied officials, said he began to have serious issues with the Kushner group after the presidential election when Kushner became a senior adviser in the White House.

Lander said he became concerned that the White House, which controls the Superfund cleanup programs, could somehow retaliate against the district and not allow the cleanup to continue if the city didn’t go along with the team’s demands. On the other hand, if he and the city voted in favor of the Kushner team, it would look like he and his colleagues were looking to help Kushner, who clearly held a financial stake in the project.

Ultimately, the Kushner joint venture sold the land in April 2018 despite the fact the land remains zoned in a manufacturing district and the cleanup is still in progress.

The Kushner group’s profit was substantial: The property purchased for $72.5 million in late 2014 was sold to the international property firm RFR Holding for $115 million.

Lander said he’s not sure if zoning issues prompted the team to eventually sell “or if it has something to do with the Kushner family’s well-publicized need for cash.” The property remains a parking lot for service vehicles. 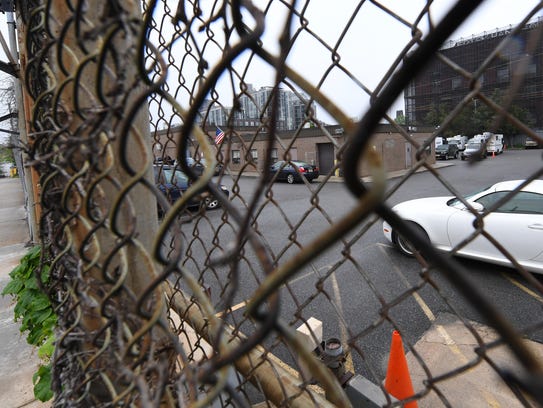 A series of real estate deals, including two sales of this lot that involved the president's son in law, offer a window into the real estate world where Trump's associates operated just before and after the presidential election. (Photo: Robert Deutsch, USA TODAY)

Interactions between Signature Bank and Cohen and Kushner did not end with the cycle of property sales in 2014 and 2015.

Cohen appears to have used his real estate investments to generate extra cash from Signature Bank last year, according to state records. In May 2017, a financing document was filed with the New York secretary of State by the five corporations through which Cohen and Chaves own 330 East 63rd St.

The financing document, which has not previously been reported, establishes that those corporations are being offered as collateral for a loan against the equity in the apartment building, according to experts who reviewed the records.

It is unclear how much was extracted from the loan or how any funds drawn from the financing were used.

New York real estate attorney Michael Zuckerman of the firm Warshaw Burstein, who specializes in complex real estate finance, said it is possible the financing statement indicates a loan was taken out to aid other business ventures.

Cohen faced complications in the early months of the Trump presidency, including questioning by the House and Senate Intelligence Committees last year and the seizure of his business records by the U.S. Attorney’s Office for the Southern District of New York in April.

“It’s going to be very hard to figure out what he did with the money,” Zuckerman said.

Reached by phone, Cohen requested questions in writing but did not respond to questions, including those concerning how he used funds taken out on the Signature Bank loan.

Signature Bank was one of three banks that received requests early this year from the New York State Department of Financial Services for records of its interactions with Kushner. The department did not respond to a request for comment.

In an interview with the New York-focused real estate publication The Real Dealpublished early this month, Kushner’s father, Charles, called the request “nonsense.”

A look at the properties related to each deal: