WASHINGTON — The acting chief of the Environmental Protection Agency, Andrew Wheeler, has come under scrutiny for his years spent as a powerful energy lobbyist. He has represented an electric utility, a uranium producer, and, most significantly, a coal magnate who paid Mr. Wheeler’s former lobbying firm more than $2.7 million over eight years.

Mr. Wheeler is now in a position to act upon issues he once raised on behalf of his clients. And he is expected to be grilled on his relationships in the Senate on Wednesday, when he makes a regular appearance before the Committee on Environment and Public Works. It will be his first testimony in Congress since assuming leadership of the agency in July, when Scott Pruitt resigned as E.P.A. administrator.

In an interview, Mr. Wheeler provided fresh details about his lobbying activities, including specifics not included in his government-required disclosure forms, which have been criticized for their lack of detail. Mr. Wheeler also said that, well before Mr. Pruitt’s ethics scandals hit the E.P.A., he had begun stepping away from lobbying activities related to the E.P.A., on the chance he might serve at the agency.

His recent activity as a coal lobbyist, he said, was pushing to kill a rule before the Interior Department that would have restricted coal companies from dumping waste into streams. He also advocated for the Miners Protection Act, he said, a bill that would have used funds earmarked to clean up abandoned mines to bolster mine workers’ health care and pension plans.

“I did not reach out to the Pruitt E.P.A. at all. I did not lobby them. That was purposeful,” Mr. Wheeler said. After the election, I cut off all ties with E.P.A. and I did not take on any new E.P.A. issues.”

Yet while his most recent work did not involve lobbying the E.P.A. directly, his activities — particularly on behalf of the coal industry, which is subject to E.P.A. regulations on fossil-fuel emissions — have drawn sharp questions from Democrats and environmental groups.

Mr. Wheeler faces at least one formal complaint, by the nonpartisan government watchdog group Public Citizen, alleging that he “appears to be working on the same specific issue areas he had lobbied on within the last two years.” That is a potential violation of President Trump’s ethics rules limiting the influence of former lobbyists on the government, the group asserts.

Mr. Wheeler’s critics point in particular to his lobbying disclosure filings, which describe his lobbying activities only in general terms that they say fail to adequately reveal what he actually worked on the past eight years. “If I had it to do over again, I would have been more specific,” Mr. Wheeler said. “But when I started lobbying I didn’t really anticipate ever going back into the government.”

However, by the time the 2016 election came around, Mr. Wheeler said he began shedding his E.P.A.-related lobbying, anticipating that he might be called on to join the Trump administration. “I knew it was a possibility, so after the election I stopped lobbying any new E.P.A. issues,” Mr. Wheeler said.

One of Mr. Trump’s earliest executive orders, aimed at fulfilling his promise to “drain the swamp” in Washington, permitted former lobbyists like Mr. Wheeler to join the administration as long as they did not meet one-on-one with former clients or work on any specific matters they had handled in private practice in the previous two years.

Mr. Wheeler, along with Justina Fugh, the E.P.A.’s senior counsel for ethics, said he had not sought or received any ethics waivers. Such special dispensations have been granted to dozens of people throughout the administration to bypass Mr. Trump’s executive order and allow them to work on the matters on which they lobbied.

“I think that’s an ethical cloud if you have a waiver. I personally didn’t want to do that,” Mr. Wheeler said. “Because I was a lobbyist, and that was made a big deal during my confirmation process, I just wanted to be on safe ground there.” 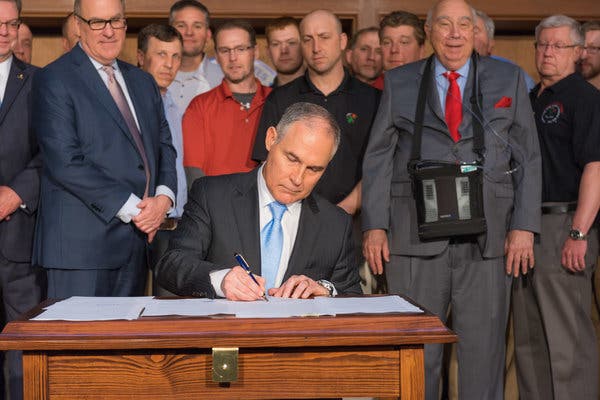 Scott Pruitt, the former E.P.A head, in March 2017 signing an executive order directing the agency to review the Clean Power Plan. At right, with breathing apparatus, is Robert Murray.

Mr. Wheeler and Ms. Fugh said he had recused himself from meeting with Mr. Murray and seven other former clients for whom he worked during the two-year period covered under Mr. Trump’s ethics rule. He also has declared one E.P.A. issue hands-off for him: a program called Energy Star that is overseen by the agency and that provides E.P.A. labeling so consumers can compare the efficiency of washing machines, air-conditioners and other appliances.

Mr. Wheeler had lobbied Congress on behalf of Underwriters Laboratories, a company that does safety testing, which objected to some provisions in a bill related to Energy Star.

Mr. Wheeler said he also had gone beyond Mr. Trump’s ethics rules to set up a process within E.P.A. to make sure he is not involved in decisions about any of the approximately 45 toxic cleanup areas, known as Superfund sites, owned by former lobbying or consulting clients. “I don’t see anything having to do with any of those sites,” he said.

Jan W. Baran, a leading Republican ethics lawyer, said Mr. Wheeler’s lobbying past may not sit well with environmentalists but it appears to meet the legal requirements laid out under federal lobbying rules. “Whether a coal lobbyist leading E.P.A. is ethical, that’s different. You can have a discussion about that,” Mr. Baran said. And, he added, “Just because Murray is involved in the E.P.A. doesn’t necessarily require Wheeler to recuse himself from everything.”

In his first detailed discussion of his lobbying, Mr. Wheeler explained the bulk of his private-practice work over the past two years:

• Representing Sargento Foods, a Wisconsin-based cheese giant, he lobbied for legislation related to genetically modified food that would define the difference between natural and processed cheese, an issue the Food and Drug Administration is considering.

• For Xcel Energy, a utility company based in Minneapolis, he lobbied to help the company obtain a charitable deduction and backed legislation that would have protected its ability to remove dead wood around transmission lines in national forests, an issue that the United States Forest Service deals with.

His work with Mr. Murray began in 2009 with a successful effort to kill congressional plans to curtail and put a price on carbon emissions. His disclosure forms after those early years, though, described his work for Murray only in broader terms, calling it “general energy and environment issues.”

Critics like Norman L. Eisen, the chairman of Citizens for Responsibility and Ethics in Washington, argue that, based on Mr. Wheeler’s own official descriptions of his lobbying activities, Mr. Wheeler is obligated to not work on “general energy and environment issues,” which would cripple his ability to serve as leader of the E.P.A.

“That is an exact description of what he does all day now at E.P.A.,” said Mr. Eisen said. He served as Mr. Obama’s special counsel for ethics and helped write the 2009 executive order upon which Mr. Trump based his 2017 order that set down rules for administration officials who have worked as lobbyists.

Mr. Wheeler acknowledged helping Mr. Murray oppose the Obama-era Clean Power Plan, which the coal industry disliked because it required states to cut carbon emissions by shifting from coal power to natural gas and renewables over 15 years. He maintained, however that he is not obligated to recuse himself from working on a plan to replace that regulation.

Mr. Wheeler also said, as he did in Congress during his confirmation hearing to be deputy administrator, that he had no direct involvement in crafting a series of controversial memos that Mr. Murray wrote. He acknowledged arranging and attending a March 2017 meeting with Secretary Perry at which Mr. Murray delivered his proposals, but said his only substantive involvement was looking at an early version.

“I had no role in the writing or drafting of that memo,” Mr. Wheeler said. “Murray is a pretty sophisticated lobbyist and they drafted their own memo and delivered it themselves.”

Mr. Murray also drafted a number of proposed executive orders for Mr. Trump, almost all of which deal directly with E.P.A. issues like eliminating a smog rule and rolling back requirements that states reduce the smokestack pollution that is carried by wind and fouls the air in other states.

Mr. Murray declined interview requests to discuss Mr. Wheeler’s work. At a recent public panel discussion in Washington, he said he believed Mr. Wheeler would do an “outstanding” job as E.P.A. administrator. “I didn’t want to lose him, but the country has him,” Mr. Murray said. “He’s an honorable man.”

You can read the full article by Lisa Friedman here.