Lawmakers, Lobbyists and the Administration Join Forces to Overhaul the Endangered Species Act

WASHINGTON — The Endangered Species Act, which for 45 years has safeguarded fragile wildlife while blocking ranching, logging and oil drilling on protected habitats, is coming under attack from lawmakers, the White House and industry on a scale not seen in decades, driven partly by fears that the Republicans will lose ground in November’s midterm elections.

In the past two weeks, more than two dozen pieces of legislation, policy initiatives and amendments designed to weaken the law have been either introduced or voted on in Congress or proposed by the Trump administration.

The actions included a bill to strip protections from the gray wolf in Wyoming and along the western Great Lakes; a plan to keep the sage grouse, a chicken-size bird that inhabits millions of oil-rich acres in the West, from being listed as endangered for the next decade; and a measure to remove from the endangered list the American burying beetle, an orange-flecked insect that has long been the bane of oil companies that would like to drill on the land where it lives.

“It’s probably the best chance that we have had in 25 years to actually make any substantial changes,” said Richard Pombo, a former congressman from California who more than a decade ago led an attempt to rethink the act and is now a lobbyist whose clients include mining and water management companies.

He and others argue that the act has become skewed toward restricting economic development and Americans’ livelihoods rather than protecting threatened animals.

The new push to undo the wildlife protection law comes as Republicans control the White House and both chambers of Congress, and is led by a president who has made deregulation — the loosening of not only environmental protections but banking rules, car fuel efficiency standardsand fair housing enforcement — a centerpiece of his administration.

The Trump administration unveiled its main effort to overhaul the Endangered Species Act on Thursday, when the Interior Department and the Commerce Department proposed fundamental changes to the law. Those include a provision that for the first time could allow the economic consequences of protecting plants or animals to be considered when deciding whether or not they face extinction.

If the proposal is finalized, species that remain on the endangered list would still see their habitats protected, but it would become more difficult to list a new species for protection and easier to remove those now on the list.

The myriad proposals reflect a wish list assembled over decades by oil and gas companies, libertarians and ranchers in Western states, who have long sought to overhaul the law, arguing that it represents a costly incursion of federal regulations on their land and livelihoods. Until now, those efforts have largely failed, even during periods when Republicans controlled both the White House and Congress.

Advocates of the environmental law agree that the proposals signal a critical moment. “The last few weeks have seen the most coordinated set of attacks on the Endangered Species Act I’ve faced since I got to Washington,” said Representative Raúl Grijalva of Arizona, the ranking Democrat on the House Natural Resources Committee. “This is a crucial test,” he said.

The Endangered Species Act was passed by Congress in 1973, and signed by President Richard Nixon at a time when using federal authority to protect threatened species was less controversial. The act has been credited with the resurgence of the American alligator, which had been hunted to near extinction for the use of its skin in purses and other goods; the gray whale, depleted by commercial fishing in parts of the Pacific Ocean; and the bald eagle, which is flourishing again after nearly disappearing from much of the United States.

The federal Fish and Wildlife Service annually spends about $1.4 billion to protect threatened plants and animals, according to the agency’s most recent expenditure report in 2016, an amount that environmentalists say has not kept pace with the need. But industry leaders say that money is wasted protecting species that don’t need it and paying green groups’ litigation fees.

Take the case of the northern spotted owl, which has been a rallying cry for both sides of the debate since it was listed as threatened in 1990. The logging industry has long blamed the owl habitats for a crippling decline in timber harvests, sparking a vicious battle over restricting the economies and livelihoods of local communities.

But while opponents of the law cite an economic burden, there has been little comprehensive analysis of the precise economic costs or benefits of either enforcing or revising it.

“Trying to put a number on the cost to industry is incredibly challenging,” said Rebecca Epanchin-Niell, an expert on the economics of the Endangered Species Act at Resources for the Future, a nonpartisan research organization in Washington. Ms. Epanchin-Niell and several other economists noted that given the economic and geographical diversity of the industries affected — oil companies, ranchers, farmers, landowners, real estate developers and others — it is difficult to put a clear price tag on the law’s overall economic effects.

As to the economic benefits of preserving an endangered species, Ms. Epanchin-Niell pointed to what advocates for the law might describe as a “moral obligation” to guard against extinction. “Economists don’t have tools to put a price on these intangible values,” she said. 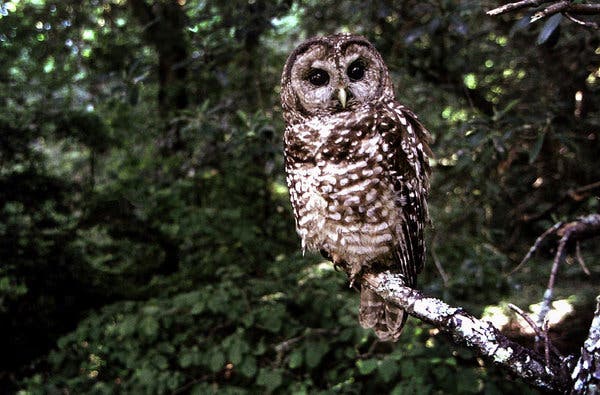 A northern spotted owl in Point Reyes, Calif.; protections for the owls led to debate over the economies of communities concentrated around timber harvests.

Efforts in previous presidential administrations to weaken the Endangered Species Act were often met with some bipartisan resistance. But the profile of the Republican Party has changed since then. Over the past decade, opposition to environmental regulations has become a more ingrained part of the G.O.P.’s identity, particularly as exemplified by President Trump.

“This is the first time that we’ve seen an orchestrated effort by the president, the Republican leaders in the House, the industry and the Interior Department all working together in a concentrated effort to eviscerate the act,” said Bruce Babbitt, who served as the interior secretary for eight years in the Clinton administration.

Opponents of the act say the current mood is simply the fruition of decades of ignored attempts to enact reasonable modifications to the law — for instance, government compensation to offset losses when landowners are unable to use portions of their property deemed critical habitat.

“Anyone who tries to do even modest reform is completely demagogued,” said Kathleen Sgamma, president of the Western Energy Alliance, a trade association for the oil and gas industry. Ms. Sgamma said environmental activists and others have also failed to understand how the law has been hurting farmers and ranchers as well as industry.

Brad Goehring, a vineyard owner from California’s Central Valley, said he is a prime example. Mr. Goehring said he can’t farm on about a quarter of his property because it is considered critical habitat for a freshwater crustacean known as the fairy shrimp.

“Think of the ramifications where you owe the bank money, you have loans to pay off and you’re told you can’t use all your property,” he said. Mr. Goehring ran for Congress as a Republican in 2010 in part on a platform of modifying the act.

While farmers like Mr. Goehring have for years urged Congress to enact changes, the recent push has been led by David Bernhardt, the deputy interior secretary, a former oil lobbyist and lawyer whose legal clients included the Independent Petroleum Association of America.

Last December, Mr. Bernhardt convened a meeting at the Interior Department between senior political appointees and career staffers, at which he laid out his plans to streamline the law. Over the course of the spring, that plan was translated into the policy proposal unveiled on Thursday.

At the same time, on Capitol Hill, the Congressional Western Caucus, a group of House lawmakers, began coordinating a strategy. On July 12, the lawmakers unveiled a package of nine bills that, if enacted, would see more permanent changes to the law than those pushed by Mr. Bernhardt’s proposal. Legislation that is passed by Congress and signed into law by the president is less easily undone than regulatory changes.

While it is unclear if the lawmakers’ individual bills could become law this year, they also worked to add amendments to two must-pass spending bills, including the National Defense Authorization Act, which specifies the annual budget for the Pentagon.

The House-passed version of that spending bill includes provisions that would prohibit the Interior Department from putting two species of land birds, the sage grouse and the greater prairie chicken, on the endangered species list for at least 10 years. That would ensure that the habitat of those birds, encompassing millions of acres across 11 states, could remain open for oil and gas development. (The Interior Department is also moving forward with a separate regulatory plan to roll back sage grouse protections.)

In past years, such provisions would likely have died in the Senate, chiefly because they were opposed by Senator John McCain, the Republican of Arizona.

But Mr. McCain today is recuperating from brain cancer and has not been active in Washington for several months. Shepherding the measure in his stead is Senator James Inhofe, the Republican of Oklahoma who has made a signature issue of advocacy on behalf of the oil industry and denying the established science of human-caused global warming.

It is expected that Mr. Inhofe will champion a provision in the House defense bill that would remove endangered species protections for the American burying beetle. The insect has a protected habitat in just four states — but one of them is Mr. Inhofe’s home state of Oklahoma.

“I think the Endangered Species Act is endangered,” said Andrew Rosenberg, director of the Union of Concerned Scientists. “They haven’t been able to do this for 20 years, but this looks like their one chance.”

Republicans also added at least nine endangered species-related amendments to the spending bill that funds the Interior Department. Among other provisions, that bill would remove the gray wolf from the endangered species list. It would also prohibit the Interior Department from reintroducing the endangered grizzly bear into the North Cascades ecosystem of Washington State, something lawmakers from the region say could threaten the area’s recreation livelihood.

Senator John Barrasso, the Republican of Wyoming who chairs the Environment Committee, introduced a draft bill that overlaps with many of the House proposals.

“We’re all aware that the Endangered Species Act hasn’t undergone any significant updates in over 40 years,” said Representative Rob Bishop, Republican of Utah and chairman of the House Natural Resources Committee, in a statement. “Now is the time to modernize this antiquated law to simultaneously benefit both endangered species and the American people.”

You can read the full article by Coral Davenport and Lisa Friedman here.

1 thoughts on "Lawmakers, Lobbyists and the Administration Join Forces to Overhaul the Endangered Species Act"