The IRS will no longer ask the NRA and other nonprofit groups to disclose donors.

The United States government is making it easier for “dark money” donors to keep their contributions, well, in the dark. The Treasury Department on Monday said it planned to end requirements that certain tax-exempt organizations identify their financial contributors on their tax returns.

The decision means groups such as the National Rifle Association, Planned Parenthood, and the AARP will no longer have to tell the IRS who’s giving them money.

The decision landed the same day as the Justice Department announced the arrest of Maria Butina, a Russian national with NRA ties who is accused of trying to influence US politics. Ethics experts say Treasury’s maneuver will make identifying activities like those Butina has been accused of even harder to track.

Labor unions, volunteer fire departments, issue advocacy groups, local chambers of commerce, veterans groups, community service clubs, and other so-called social welfare 501(c)(4) groups or those that don’t generally get tax-deductible contributions will be freed of requirements that they list the names or addresses of their donors on their annual returns with the IRS.

Since the Citizens United Supreme Court decision in 2010 that held political spending is a form of protected speech under the First Amendment, the IRS has been flooded with applications from groups seeking 501(c)(4) status. A number of well-known organizations have it, including the Democratic Socialists of America, Americans for Prosperity, and the NRA.

Before this change, such groups had to report to the government the names of donors who gave them more than $5,000 a year. The names of donors weren’t revealed to the public, but the amounts were, and government officials were able to see where money was coming from. After the new reporting requirements kick in, even the IRS won’t know.

“It is quite clear that what they want is to not enable enforcement that is actually part of the law by the IRS on issues of whether or not some of these groups are actually political committees,” Ann Ravel, a former Democratic commissioner on the Federal Election Commission (FEC), told me. “That’s the whole purpose of this.”

Dark money is about to get a little darker

Dark money is political spending meant to influence voter decisions and politics where the source of funds is undisclosed. Donors can give thousands or millions of dollars to push issues and wield influence through groups like 501(c)(4)s without ever having their identities revealed — although 501(c)(4) groups can only take in “dark money” as long as political activities aren’t their primary purpose.

The Center for Responsive Politics notes that political organizations spent more than $15 million in 2015 to influence the 2016 elections outside of party or official campaign structures; only $5 million of that was reported to the FEC.

The revised requirements will go into effect for taxable years ending on or after December 31, 2018, meaning the reporting requirements will kick in for returns due after May 15, 2019. Tax-exempt charitable organizations, those listed under section 501(c)(3) of the IRS code, will still have to say who’s giving them money.

Paul S. Ryan, vice president at the watchdog group Common Cause, said Americans for Prosperity, the advocacy group founded by the Koch brothers, has been fighting for the IRS change for years and has actively opposed state efforts to expand donor disclosure requirements for political spending. “AFP has been the most active, open, and visible advocate for reducing and preventing disclosure of donors to 501(c)(4) organizations,” he said.

Senate Majority Leader Mitch McConnell applauded the IRS’s decision and said it was “a move in the right direction to end activist regulators’ culture of intimidation to silence political speech.”

Treasury Secretary Steven Mnuchin said in a statement announcing the decision that Americans “shouldn’t be required to send the IRS information that it doesn’t need to effectively enforce our tax laws,” adding that the IRS “simply does not need tax returns with donor names and addresses” to do its job.

Mnuchin also said that the decision will not limit transparency. That’s true in the case of tax-exempt charitable organizations, which will still have to disclose donors. But other groups will be able to keep even more information from the public and from the government. They can still engage in politics, and as long as they don’t spend more than half of their money on campaign ads or election-influencing activities, the organizations don’t have to say who’s funding them, even just to the IRS.

“They say if they need it, they can request it. But there’s no way that they would have any reason to request it if they don’t have the information to begin with,” Ravel, the former FEC commissioner, said.

The timing of the rule change and the Maria Butina charges is ... not ideal

The Justice Department on Monday charged Maria Butina, a Russian national, with conspiring against the US as a foreign agent. One of the elements under scrutiny is Butina’s ties to the NRA, which she courted in her attempt to establish a “back channel” of communications between the US and Russia. There have also been reports that the FBI is investigating whether Russian money went to the NRA during the 2016 election to help Donald Trump.

Ethics experts say the Treasury Department’s announcement on Monday regarding donor disclosures will make deciphering the murkiness surrounding the NRA more difficult because it undermines the federal government’s ability to detect illegal activities by nonprofit groups.

It’s still illegal for groups such as the NRA to spend contributions from foreign nationals to influence US elections, said Ryan, but because donations don’t have to be listed, it will be harder for the authorities to identify malicious activity.

“Large amounts of foreign national donations to a politically active nonprofit could be a red flag to IRS staff that could trigger greater scrutiny,” Ryan said. “But such red flags will no longer be visible to IRS staff. President Trump’s Treasury Department has struck a blow to US democracy with this rule change.”

Sen. Ron Wyden (D-OR), the ranking member of the Senate Finance Committee, sounded the alarm bells in a statement on Monday. “Trump’s Treasury Department made it easier for anonymous foreign donors to funnel dark money into nonprofits the same day a Russian national linked to the NRA was arrested for attempting to influence our elections,” he said. 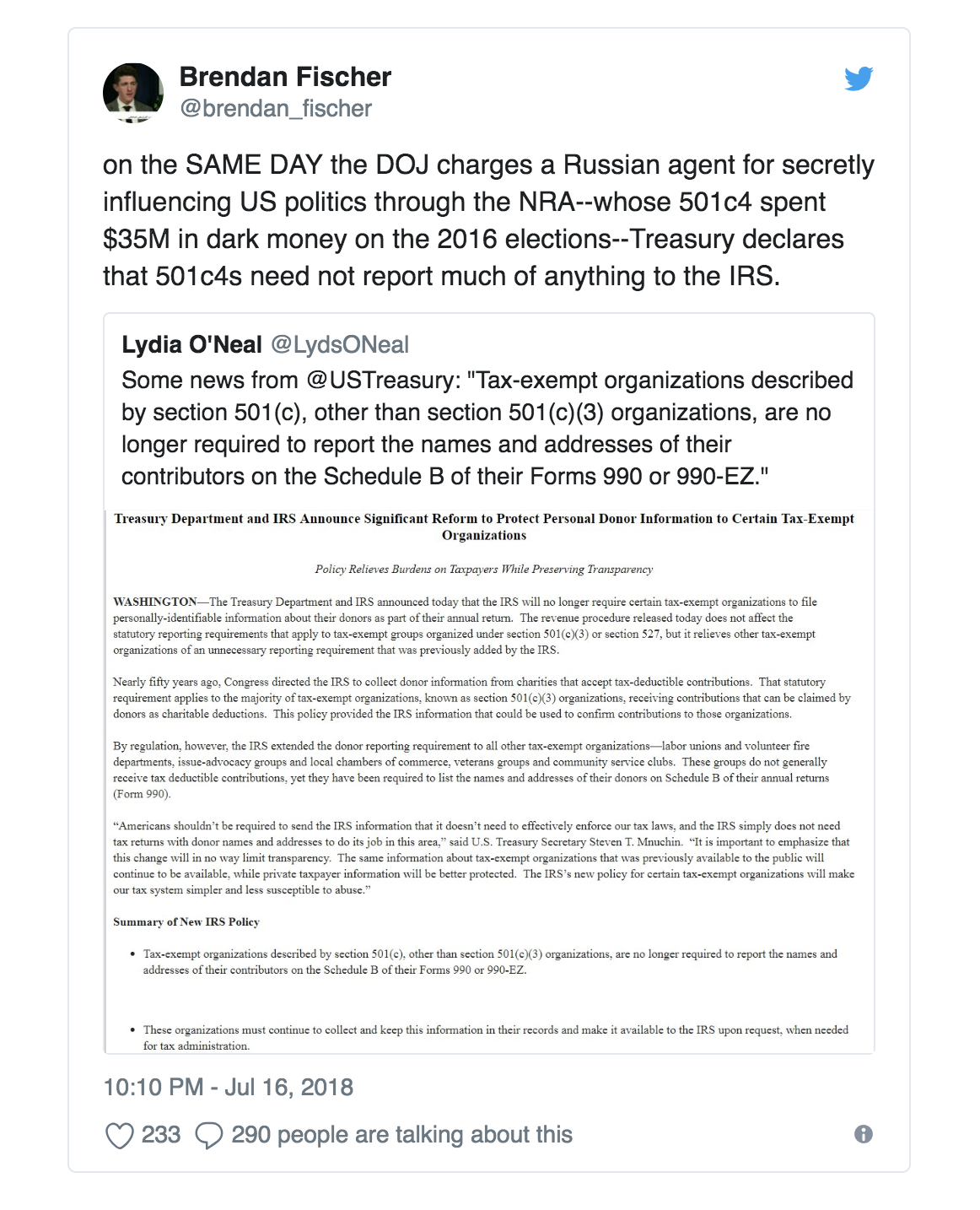 Corey Goldstone, a spokesperson for CLC, called the Treasury Department’s Monday decision “shocking” in an email.

“The requirement that 501(c)(4)s report their top donors to the IRS was one of the few ways that the government could identify illegal foreign money in elections,” he said. “Now that this requirement has been tossed aside, dark money will be much harder to trace.”

The Treasury Department’s announcement also came the same day of President Trump’s summit with Russian President Vladimir Putin in Helsinki, during which both leaders refused to acknowledge Russian meddling in the 2016 election. The timing is “perfectly fitting,” said Kathleen Clark, a law professor and ethics expert at Washington University.

“This change will make it easier for 501(c)(4) groups to hide their use of money from foreign donors in order to influence US elections,” she said. “Putin would approve of this change.”

You can read the full article by Emily Stewart here.