(CNN) - Campaigns and PACs spent at least $3.2 million at Trump-owned and branded properties throughout the two-year midterm election cycle, a CNN analysis of Federal Election Commission filings shows. And the total could rise after post-election financial reports are published by the commission.

No single group spent more than the Republican National Committee, which spent at least $1.2 million at the properties since the start of 2017.

About half of the RNC spending came in two installments -- $367,000 for travel expenses at Trump National Doral Miami in mid-June, after the group's spring meetings at the Florida club, and $222,000 for "venue rental and catering" at Mar-A-Lago in March connected to fundraising events at the resort.

And America First Action -- a pro-Trump super PAC founded early in 2017 and funded primarily by GOP megadonor Sheldon Adelson -- was another top patron of Trump properties, dropping at least $360,000 throughout the cycle.

Overall, the $3.2 million in spending at Trump properties during the midterms was down slightly from the 2016 presidential cycle. Between 2015 and 2016, Trump properties raked in at least $3.7 million from campaigns and PACs, with the Trump campaign itself accounting for north of $2 million of the spending during that cycle. That included rent paid from the campaign to the Trump Organization for its headquarters space in Trump Tower, floors below Trump's office and penthouse apartment.

In 2018, the spending has gone to a mix of venue rental, catering, and travel expenses across multiple properties. Trump Tower in New York has drawn nearly $740,000; the Trump International Hotel in Washington, DC, has drawn $1.4 million; and a pair of Trump's Florida properties, Mar-A-Lago and Trump National Doral, have drawn nearly $1 million combined. 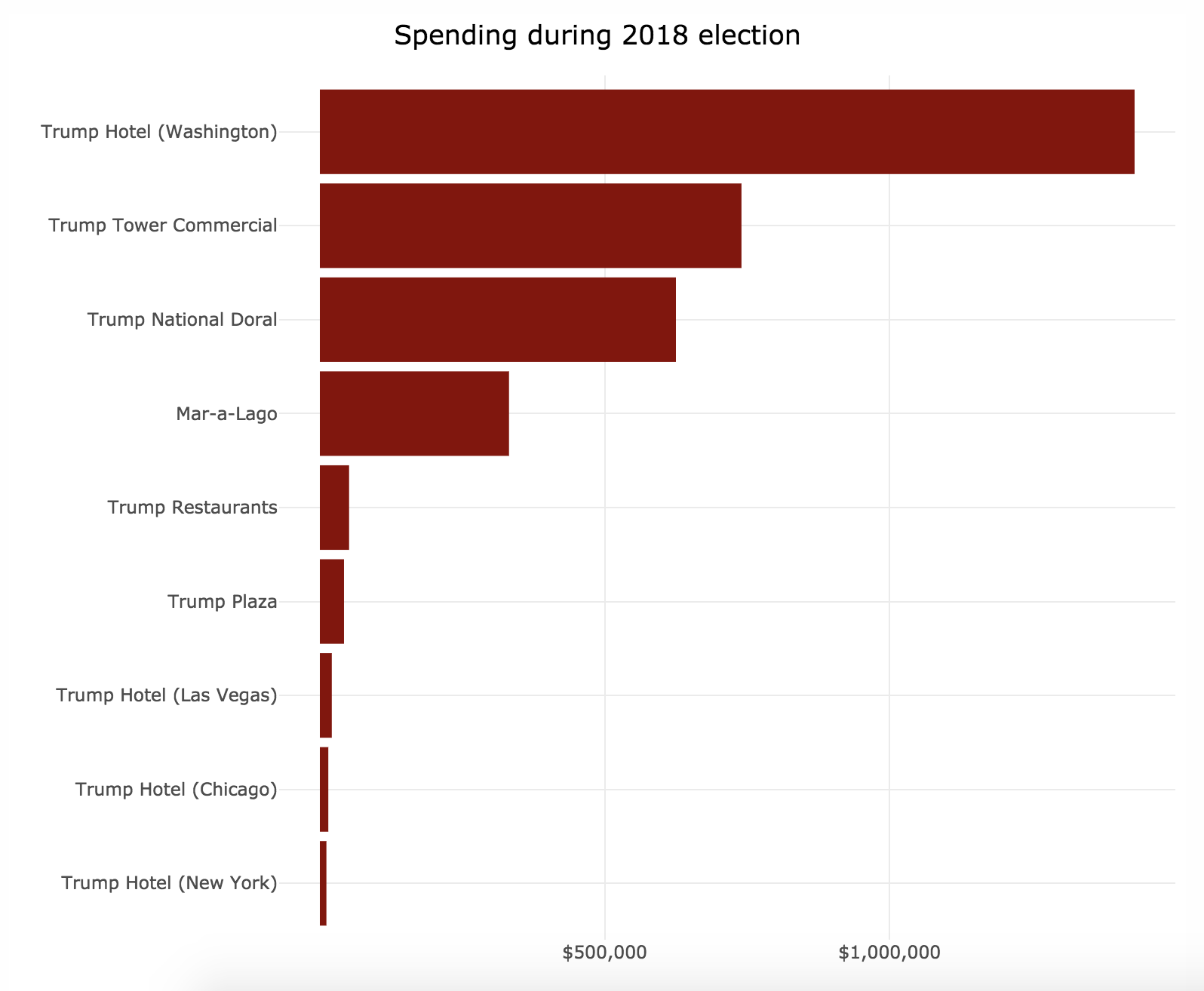 In response to a request for comment on RNC spending at the properties, an RNC official said donors enjoy visiting Trump properties, and also pointed to security, convenience and price as factors in the committee's decision-making.

The official added that Trump properties are often cheaper to rent than other venues, noting that the FEC demands the RNC receive market rates.

A Trump Organization spokeswoman did not respond to calls or emails seeking comment.

After Trump was elected President, he placed his business into a trust controlled by his adult sons, Don Jr. and Eric, but did not liquidate his holdings or let an independent manager handle the trust without his knowledge -- the approach favored by past presidents and by ethics experts, because it separates the President's personal profit motive from his decisions on behalf of the government.

The setup has drawn criticism from ethics watchdogs, who say it allows for the appearance of a conflict of interest. The Trump administration has consistently defended the legality of the arrangement.

House Democrats, newly in control of the chamber, have vowed to bring investigations into Trump's businesses in the coming congressional session.

Rep. Elijah Cummings, a Democrat from Maryland who is expected to lead the House Oversight and Government Reform committee, told CNN this week he plans to look at "all the things the President has done that go against the mandates of our founding fathers in the Constitution."

The spending at Trump properties reported to the FEC only covers activities related to federal elections in 2018, not any spending for local or state elections.

You can read the full article by David Wright and Aaron Kessler here.